Journey Through the Great Pyramids of Egypt 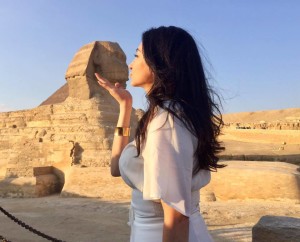 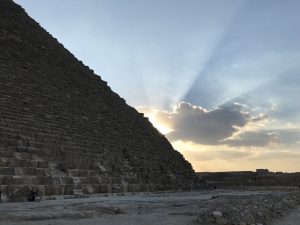 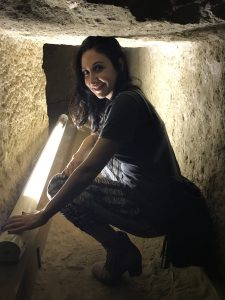 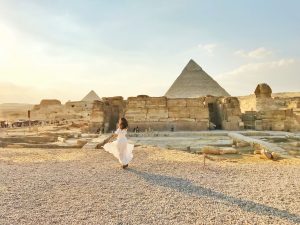 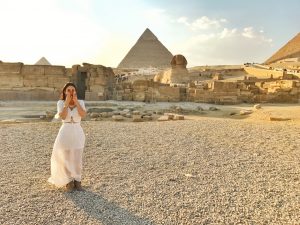 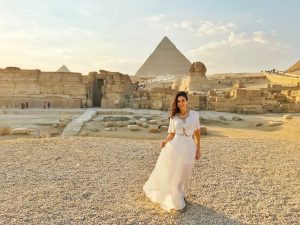 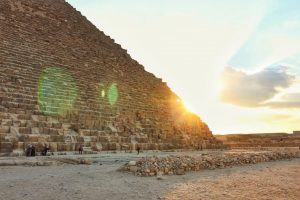 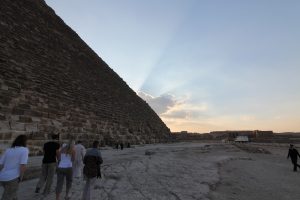 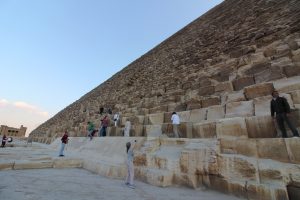 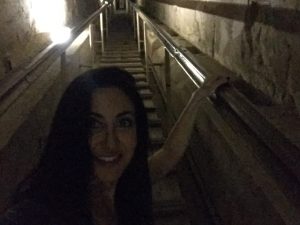 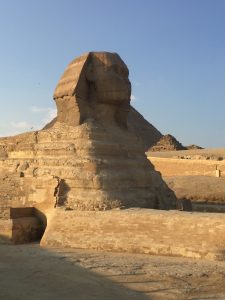 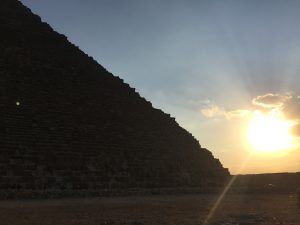 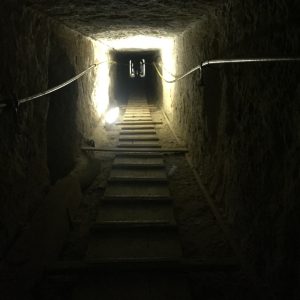 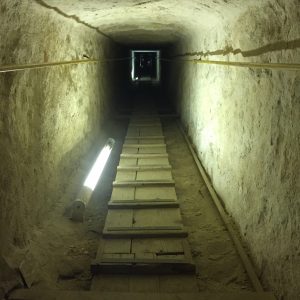 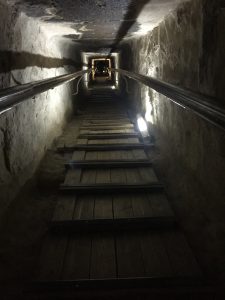 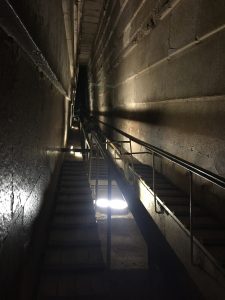 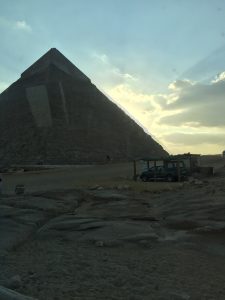 (The last picture was taken from our bus, you can see the energy around the pyramids)

Background: You’re not supposed to have cameras or cell phones in there. “Somehow” I missed that memo and shoved my phone deep inside my bag.

I opened up my purse to show them I had nothing in there and walked in.

We were lucky enough that our teacher, Stewart Pearce, rented out the large pyramid for our group for TWO HOURS!

No one else was allowed in!!

To begin the journey we crawled on our hands and knees down to the well, which was normally off limits to the public but we were allowed in.

After the well, where ceremonies used to be conducted, we continued through another crawl space up to the Kings Chamber.

The journey to the Kings Chamber consisted of us crawling on our hands and knees through an incredibly low, narrow, and dark passage way as in the picture above and then other parts of the climb involved a steep incline where we pulled ourselves up via the railing.

At that moment I was in shock that I was actually crawling through these mystical and magical ancient structures. This was a dream come true!

On the journey I was in the middle so when I got to the top I was greeted with sound (song) from the others echoing through the passage way as I entered the room.

It was hauntingly beautiful.

I was finally able to stand up and walked into a dark room in the middle of the pyramids lit by only a few portable lights. The sound of everyones voices vibrated through the acoustics of the building and deep into my soul.

It was breathtaking and words cannot describe the intensity of this FEELING.

In the Kings Chamber we gathered around in a circle while singing, chanting, and experiencing a sound healing ritual led by Stewart our guide and teacher.

There was nothing scary or cultish about it rather the experience gave me and everyone else goosebumps from head to toe because it was so beautiful.

One by one we laid down in the sarcophagus in the center of the pyramid and allowed our old self to die while allowing space for new experiences to come in.

While we each experienced this ritual one by one the rest of the group sang in a circle around each of us. It wasn’t with words…it sounded like angels.

When I was lying down in the sarcophagus one of the women in the group told me later what she saw.

The feeling she got was that they were going through my body and recoding me. This is what she felt and saw during my moment. I can promise you that everyone of us had moments similar to this. I am grateful to her that she was open enough to see this on me.

The ceremony went on for over an hour while we each took our turn. The kind of unconditional love that we each displayed and showed up for one another and while holding space without judgment is what love is truly made of.

I had tears in my eyes throughout the ceremony because of the amount of love that I was experiencing from the group.

There was more….but I will leave that between us – a sacred group that was brought together by destiny to support one another on this once in a lifetime spiritual pilgrimage through Egypt.

The ancient Egyptians understood the meaning of life and had a consciousness far beyond anything we can comprehend today.

The energy is still alive in the pyramids, in the temples, and in the land. I saw things that took my breath away. I saw the connection they had with other dimensions and other realms…call them starseeds, aliens, what have you…I witnessed it first hand.

Because this trip was one of my first to witness so much on the spiritual plane outside of meditation I had a moment where I thought I was making it up until I checked in with others in the group and many of us had similar experiences in feeling and seeing beyond the veil.

It was phenomenal to say the least.

I walked into this trip with an open heart and an open mind and because of that I was shown things out of my normal scope of consciousness.

What I learned and felt cannot be summed up in a few paragraphs, however, I will tell you this…this physical world is beautiful and tragic at the same time…but it’s not all there is.

We get so attached to what we can touch and see with our hands and physical eyes that we forget we are first and foremost souls having a human experience…this world was created by our minds which keep us contained and limited….yet, there is so much more beyond this third dimensional construct.

I will leave you with this…It is not crazy to believe in divine unexplained magic of the universe….the ego doesn’t want to believe it. The ego fights it and calls people who have experiences like that “crazy” and/or “insane”.

Fear does that, it likes to label and blame to make oneself feel “secure” and in control again. And with that, the only thing that is truly crazy is to believe that this is all there is.

We are so small, yet at the same time, so powerfully grand.

Anything is possible. xo